But for the grace of God -- and the armed security guards in the Houston Rockets' locker room -- UF hoops standout Vernon Maxwell (1984-88) may have beaten Aaron Hernandez to the punch by becoming the first former Gator athlete convicted of murder.

I just saw this on Fox News: 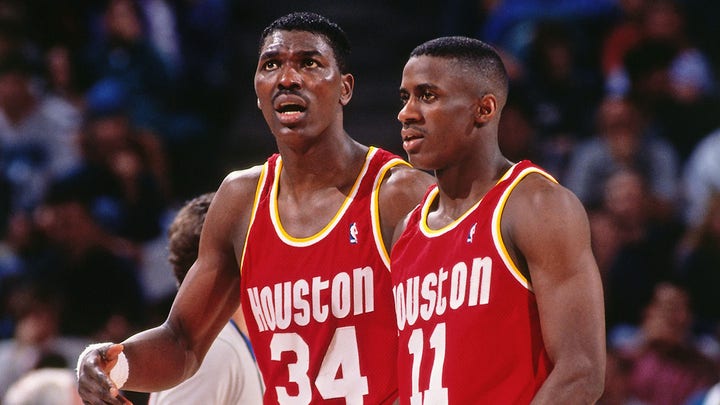 Teammates get into scuffles all the time behind the scenes, but it's not every day one comes close to becoming a crime scene.

That's what happened between Hall of Famer Hakeem Olajuwon and former Houston Rockets teammate Vernon Maxwell during a game in Seattle.

Maxwell, who won two rings in Houston during a 12-year NBA career, hopped on Gilbert Arenas' "No Chill" podcast and recalled his wild encounter with "The Dream" after complaining about his limited role in that game heading to the locker room at halftime.

Olajuwon apparently yelled at Maxwell from behind and then "smacked the s--- outta me," Maxwell recalled.

"That motherf----- hit me so hard, man, knocked me out the chair," Maxwell said. "I jumped up, grabbed my chair and throwed it at the motherf-----, bust the glass in the locker room."

At that point, Maxwell said police wound up drawing their guns on him in the locker room. "I was like ‘Damn, they got the guns on me at a professional halftime. At a professional game,’" he said.

With broken glass all over the place, Maxwell picked up a piece and had a potential weapon in his hands that he says he would have used had it not been for police and everyone fleeing the locker room. "I was gonna chase Dream and stab the s--- outta him," Maxwell said.

Thankfully, no one was hurt, and Maxwell called Olajuwon a "great teammate." The pair won back-to-back titles in 1994 and 1995.

Anybody remember watching Vernon at UF? He was jusssst before my time.

Typical. A short fuse and wild, almost fantastic overreaction seems to be a hallmark.

Founding Member
He was a baller, but he was also a thug.

He did play four years and graduate. Are you guys saying some professors may have throwed him a break?

Anybody remember watching Vernon at UF? He was jusssst before my time.
Click to expand...

Montgomery made a heck of a behind the back pass on a fastbreak that Maxwell finished off against Kentucky. The Gators won that one.

I have attended 2 UF v UK games, one @ home, one @ Rupp (Billy D's first win their) the Gators won both.

It was pretty cool in '89 when the Gators won their first conference title.

Never had a class with him, but saw Emmitt a few times around campus.

Only athlete I ever had class with was on the swim team, Ag Economics.
Last edited: Aug 4, 2022

Founding Member
Drugs make you do some strange things....

They called him mad max for a reason. I knew a guy that went to Buchholz the same time Vernon did. He said a football player pulled his shirt up in the locker room to reveal a gun tucked in his waist. Crazy back then. Max was a great player and defender. He and Storming Norman were made for each other............

This doesn’t surprise anyone

G. Gordon Gator said:
"I was gonna chase Dream and stab the s--- outta him," Maxwell said.
Click to expand...

I clerked for Judge Frederick Smith in law school. I helped prepare the order that gave Mad Max’s NBA pension to one of his Baby Mommas.

He was a no-show for that hearing.

Fun was the goal and we hit the bullseye

deuce said:
Drugs make you do some strange things....
Click to expand...

Great story from another player I remember from the Maxwell Era... Making good a pledge he made his father, former basketball standout Clifford Lett, 33 years after helping guide the Gators to the first SEC championship in program

I'm not saying as a kid growing up a Magic fan that I'm still bitter about '95 and think that maybe if this had happened (and no one died) that perhaps we win the title and maybe Shaq stays and the Magic continue to challenge Jordan and the Bulls...but I'm glad it didn't happen and no one was hurt.

Founding Member
Nah, Vernon didn’t pull a knife on Hakeem, he just put on a Lorenzo Charles jersey and Hakeem just aimlessly wandered away from him.
You must log in or register to reply here.